Clondaliever, the townsland where I was born in 1941, is in north Westmeath. It is the place where the three parishes of Collinstown, Taughmon and Delvin meet. As most facilities in rural Ireland were to be found at the centre of a parish, the Clondaliever that I was born into was quite isolated. It was at least three miles from the nearest church, school, shop, post office and pub. During my early years our house, like most of the neighbouring houses, was without running water, electricity, central heating, radio, telephone or car, and there was no decent road for miles. This list of what we did not have was certainly not read as a list of indicators of poverty. Wealth and poverty were measured by the amount of land that you owned. Because my father owned a few acres more than our immediate neighbours we were considered to be reasonably well off. Alongside the impressive list of what we did not have I hasten to add another impressive list of what we had in abundance – open spaces, clean air and fresh water, fresh food that came straight from the farm to the table, and a safe, happy and supportive home background.

I grew up on a mixed farm of roughly one hundred acres of mostly very good land. This sounds like an easy farm to work, but it wasn’t.   It comprised five separate pieces of land; two of the fields were in Monkstown, over two miles west of our house, and one field was in Battstown, over two miles in the opposite direction – not much of a problem if you have a tractor and a car, but all we had for getting around, in addition to walking, was a bicycle and a horse and cart.

During the compulsory tillage scheme in the 1940s my father was under great pressure, travelling regularly from Clondaliever to Monkstown, as he tried to meet the minimum tillage requirements. The Compulsory Tillage Order of 1940 instructed every farmer to till a certain amount of land and sow a certain acreage of wheat.  This resulted from the shortage of imports during the second world war. Being a strong supporter of the ruling fianna fail party, my father willingly made the extra effort. His cause was not helped, however, by the fact that he worked with the very minimum of farm equipment. A neighbouring farmer with a tractor was hired to plough. Another farmer with a reaper and binder came to cut the corn and tie it into sheaves. A third farmer came to cut the meadow with two horses pulling a mowing-machine. Some time later the horses were replaced by a tractor. It was often up to six months after doing the work that these farmers would call back to the house looking for money. My father did all the follow-up work with the help of one farm labourer and one horse.

There was very little specialisation at that time. My father, like most of our neighbours, was engaged in a mix of farming that aimed at producing basic food requirements and generating some cash. The tillage included corn crops (oats, barley and wheat), and root crops (potatoes, turnips and mangolds). Cabbages were also grown in the field. We did not have a vegetable garden until years later. In addition to the tillage there were cattle, sheep and a small number of pigs. My mother took care of some hens, turkeys and ducks. Turf was cut and saved on Balreagh bog which was over three miles from the house. Cash was generated by selling cattle, lambs, wool, wheat and eggs. My father controlled the little cash that was around. For the most part it was a cashless existence, with expenditure kept to a minimum.

The farm was an excellent school of practical learning. From an early age, like most boys growing up on a farm, I was involved in a wide range of activities with both crops and farm animals. It was not unusual for boys to be kept at home from school to help with planting or harvesting potatoes, making hay or saving turf. In most cases helping on the farm was much more enjoyable than learning in the classroom. My parents put great value on education and consequently I was seldom out of school because of farm work.

For most of the work that I did around the farm I was accompanied by my brother Paddy. We put on what we called our old clothes for farm work, and our good clothes for most other occasions such as school, mass, going to Mullingar and attending GAA matches. We had a lot of physical contact with the animals on the farm.  Every morning and evening cows were milked by hand, and cows, calves and pigs were fed. Young calves were trained to drink milk out of a bucket. This involved getting the calf to suck a finger while its mouth was pushed into the milk. There was usually a lot of struggling and snorting before the message got across. We helped cows deliver their calves and ewes deliver their lambs. We developed the skill of restraining a calf or a cow by holding the nose with one hand and the neck or a horn with the other hand. The animal could then be dosed or treated in some other way.

I also had the dubious honour on a couple of occasions of being asked to catch the blood as it gushed from a pig’s throat after he had been stabbed by my father. My mother would use the blood for making black puddings. I also learned how to kill a chicken by holding the legs in one hand and giving the head a short sharp pull with the other hand. It was done effortlessly and without any fuss. Sex, birth, life and death in the animal world were all around us but it was mostly a male experience. Women or girls were seldom present for the sex, birth or death scenes. We saw all activities simply as tasks that needed to be done and we got on with them as best we could. We never set out to cause unnecessary pain to any animal or bird.

After the ploughing the horse dragged a harrow up and down the field to break down the soil in preparation for sowing crops. I felt very important the first day my father put me in charge of the horse and told me to do some harrowing. When my father decided to sow corn by hand he tied the corners of a bed sheet to form a container for the seed. With this over one shoulder he used his free hand to scatter the seed.

On a couple of occasions Paddy and myself brought three or four bags of oats by horse and cart to Mulvaney’s mill in Multyfarnham.  With potholed roads and iron-shod wheels it was an uncomfortable ride. My mother used some of the milled oats for making porridge. After a couple of helpings of this porridge we certainly had no fibre deficit. The mill ground whatever was in the bag, and some of that was fairly rough on the tongue. As I enjoy my helping of porridge these mornings I am grateful for the more refined processing now employed.

My father prepared the drills for the potatoes aided by the horse and a simple plough. The next task was to get the manure from the farmyard into the drills. The manure had been taken from behind the cows every morning during winter and thrown on to a dung-hill in the yard. This dung or manure was taken to the field by cart and thrown into the drills in small heaps. One of our tasks, using a two or four pronged fork, was to spread this manure evenly along the drills. The next task was to plant the potatoes. The seed potatoes for planting were either bought in the market in Mullingar or selected from the previous year’s crop. Each potato was cut into two parts, making sure that there was at least one good eye for sprouting in each part. While sitting on the floor of the barn cutting seed potatoes my father would often talk about his youth. Some of his stories were about his brief time in primary school, others were about experiences he had while walking on dark nights to play cards in a neighbour’s house. He did not believe in ghosts and was no more scared of darkness than of daylight. He also liked to talk about days when he drove cattle long distances to and from fairs or from one farm to another. He surprised us a bit when he recalled some good catches he brought off while playing cricket.  He very seldom mentioned anything about the war of independence or the civil war and to my knowledge he played no active part in either of these events. I now find this very surprising considering that he was aged 30 in 1916, and in later life was a staunch supporter of Eamon de Valera.

Planting potatoes involved carrying a bucketful of seed potatoes in one hand while using the other hand to place the potatoes about 30cm apart in the bottom of the drill. With our fingers making regular contact with the dung in the drills we seldom smelled of roses as we left the field. As we got a bit older and stronger we were able to plant potatoes while travelling at a brisk walking pace. My father then followed with the horse and plough covering the planted potatoes with clay as he went along; this was called closing the drills.

Some of the work was hard work. Certainly thinning and weeding long drills of turnips was hard work, and some winter nights spent out in the fields taking care of sheep with new-born lambs are remembered mostly for the threatened frostbite in our fingers and toes. These difficult days were greatly outnumbered by the many wonderful happy days we spent on the bog, making hay, chasing rabbits, climbing trees, throwing snow balls, sliding on frozen ponds, or trying to develop some basic hurling skills. 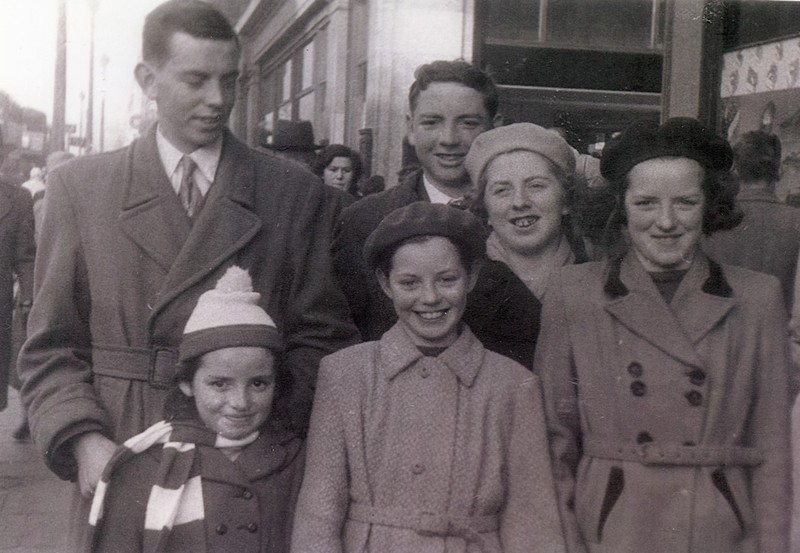