Austin Reed had a large factory in Omagh (also one that our family established and made a balls of) but it was modern and shambolic, employing 250 people and English management.  The English management was most objectionable, they seemed to think they were in the Punjab and treated the staff with derision.  They were never comfortable in Ireland nor was Ireland comfortable with them.  They carried an enormous stock, enough fabric at all times to last a year and a factory through-put of 12 weeks (I had been achieving one week in Lifford with quick response system).  I saw their enormous fabric stock as my opportunity and in 1969 bought 1500 yards from them to make 350 shirts in the Tee Clothing Co in Frances Street  in Dublin.  They were happy to sell their fabric and let me do what I liked with it.  I had made some money on a deal I did with Ben Dunne (Jr) and paid for the fabric with that.

The shirts got made and Kevin Moore (Mr Gear of Talbot Street) bought them all from me and paid cash.  This gave me liquid to buy a new suit, two ties, a large suitcase and a plane ticket to London.  Carnaby Street was flying and the King’s Road now in full flight.  I wanted to find a customer with 5 or 10 shops who could give critical mass to allow me get fabric and production.  Some of the people I tried were “Granny Takes a Trip” and “Mother Wouldn’t Like It”.  They were simply crazy, stoned and dangerous.  But I found “The Squire Shop” and sold 1000 shirts.  I returned to Ireland a hero (January 1970).

Around that customer and 10% commission I built a significant business over the following ten years (1969 – 1979).  Every penny re-invested.  By 1979 I had 10/12 employees, was getting CMT from The Solo Shirt Co in Ballybofey and selling 200 dozen shirts a week.  I was making noise rather than money but had momentum from the constant flow of commission cheque (up to 1977) added to buoyant sales via three reps and myself all around Ireland. 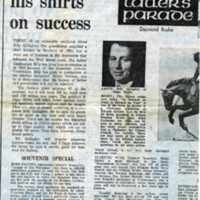 'My only guide to London shops was the Sunday Times newspaper where they would do a feature on these new crazy men's shops in and around Carnaby Street'
'Clubs are frequented mostly by bachelors, widowers, the unattached and a large contingent of poets, musicians, politicians and freaks'
← Previous Page Next Page →