Banking was different in the 60s, very much based on trust and reputation.  When you made a lodgement the cash was available to you at once although it took 3-4 days for the cheque to find its way back to the drawer.  The Foyle had an overdraft of £18,000 that never went down but crept up by £100/200 a year.  Bank managers were universally mannerly and discreet.

On the day we decided to close down forever my father I went into the Northern Bank in Strabane and told the teller we were closing down.  He wondered why we were telling him.  We explained that we owed him a lot of money and hadn’t got any.  We said we had been trying to come to an agreement with others to take over the business but had failed to do so.  My father took a little crumpled note from his top pocket and passed it to the teller and also gave him the key saying “it is your factory now”.

My father explained that although we had failed to find a buyer we had a person who was interested but he would only give us £2,950 for the lot (the premises, machinery, stock, work in progress etc) but we owed the bank £18,000.  (This is what the crumpled note was about.) The teller said to hold on a minute while he spoke to the manager.  When he came back he gave us back the keys and the note and said they would be in touch. So they were, three weeks later.

The crumpled note gave the name of Stephens Bros of London as the people who would like to buy our factory for the aforesaid £2,950.  I came to an agreement with them that they would employ me at £20 a week and give me a company car (Ford Cortina).  They would give me 20% of the business and I would manage it for them.  They honoured part of this deal only as they in turn were “in hock” to Austin Reed of London who effectively took over the business and the management of same leaving me as a salesman only.  Whereas I was screwed by this new agreement and the 20% shareholding never materialised I did get permission to sell anywhere in the world on 10% commission. 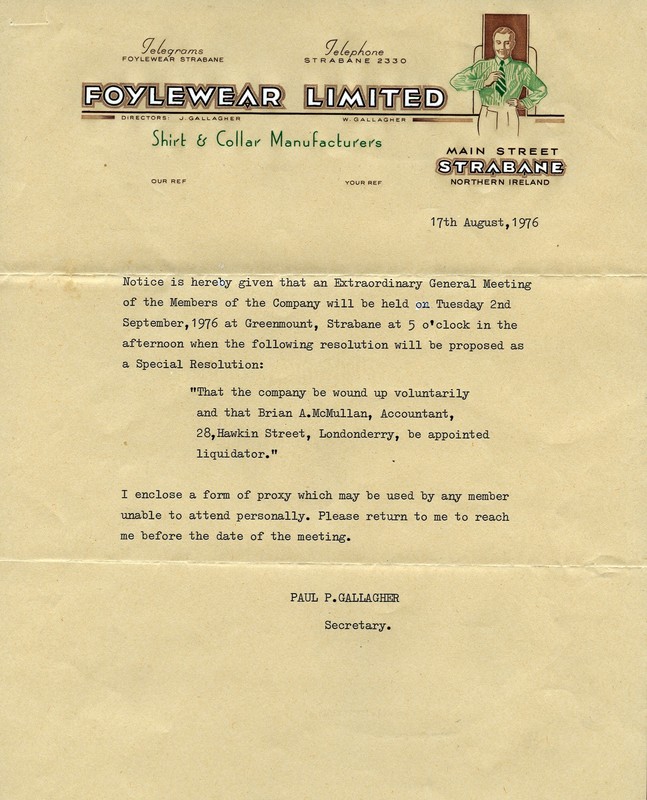